Fighting Against the Trouble Within

Jude began his letter to an un-named Christian church saying that he had intended to write about their common salvation. That would have been nice! An encouraging letter about eternity with God that they all will share because of their mutual belief in Jesus and His death and resurrection.

But something made him change the direction and contents of his letter. Instead, he tells them to fight!

Jude appeals to the church to CONTEND EARNESTLY (another way of saying fight or strive) for the faith they share.

Jude’s letter is only one of many New Testament exhortations to believers to strive for the truth of the Gospel. In the LOOK section of the App, I tap on Cross References to see so many other examples of this language, especially in Paul’s letters:

What threatened the true faith?

In verse 4, Jude explains what he knows to be causing harm in the church:

“For certain persons have crept in unnoticed, those who were long beforehand marked out for this condemnation, ungodly persons who turn the grace of our God into licentiousness and deny our only Master and Lord, Jesus Christ.”

Paul expressed these same concerns to the Elders of the church at Ephesus:

“Be on guard for yourselves and for all the flock, among which the Holy Spirit has made you overseers, to shepherd the church of God which He purchased with His own blood. I know that after my departure savage wolves will come in among you, not sparing the flock; and from among you own selves men will arise, speaking perverse things, to draw away the disciples after them. Therefore be on the alert, remembering that night and day for a period of three years I did not cease to admonish each one with tears.” Acts 20:28-31

What happened then, is still happening today. We have to be on the lookout for the ungodly in our own churches, and for that matter, in the greater “church universal.”

How Do We Identify These “Certain Persons”?

God’s word helps us know how to pick out the “unnoticed” from a crowd of believers. By tapping on each word in the verse, we can better understand how these “certain persons”:

Do you know anyone like this? They can be hard to spot, especially when the rest of the world tells us that everyone can have their own opinions and we just need to “love everyone.” 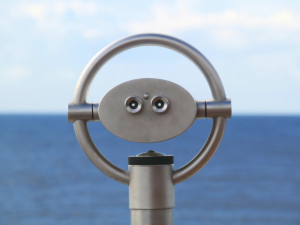 Keep on the Lookout

Just like a ship’s captain has to depend on the ship’s lookouts, or engage sonar to detect what’s lurking beneath the water, we need to be on the lookout as well. We need TUNE into the TRUTH of God’s Word so we can recognize the false as it creeps into our churches, books, seminars, and teaching.

Jude is about to give us more insights to help us in the rest of his letter.