Reasoning Through the Age-Old Debate of Faith vs. Works

I wonder if James had any inkling of the debates that would arise through the ages over this last section of chapter two. Even Martin Luther, the father of the Reformation, at one time took issue with James’ discussion of faith and works.

The challenge for me when studying this part of God’s Word is to do what Janet encourages us in the GodChats lessons: remove all my presuppositions.

I need to zero in on the Word, let God’s Word teach me about His Word, not what man says about these words.

So I dive right in to the text!

Starting with verse 14, James asks two questions and the first is this:

What use is it, my brethren, if someone says he has faith, but he has no works?

My favorite place to start when I bump into a verse that makes me ask “What does THAT mean?” is to go to the Dictionary tool.

I want to know what James means by the words “faith” and “works.” The dictionary shows me the base definition, but also the usage of that word in a particular verse.

Tapping on “faith” I see it means a “firm persuasion, conviction, belief in the truth, veracity.” Then as I read through the entire definition, I see it’s usage in James 2 falls under the form of a “technical term indicative of the means of appropriating what God in Christ has for man (the Gospel), resulting in the transformation of man’s character and way of life.”

So saying I have faith in Christ should be indicated by a transformed life.

James asks the question then, what about the person who SAYS they have faith, but the works of their life show no transformation?

So then I tap on the word “works” to find its meaning which is “toil, an act – deed, doing, labour, work.” In the context of James 2:14 – 26, these are works that spring from faith, combined with transforming faith.

Can that faith save him?

What kind of faith does James mean? Based on his first question, it’s a faith that is spoken, but with no evidence of deeds or acts springing forth from that spoken faith.

James gives us two examples of a faith merely spoken in the next verses:

Someone is without clothing or food and the person who SAYS they have faith doesn’t do anything for that one in need. In verse 17, James calls that kind of faith “dead.” Ouch!

Moving on to verse 19, he likens that kind of faith to the faith the demons have in God:

“You believe that God is one. You do well; the demons also believe, and shudder.” Again, Ouch!

James seems to be saying here that a mere intellectual acknowledgment of faith in Christ, without evidence works, is dead faith. 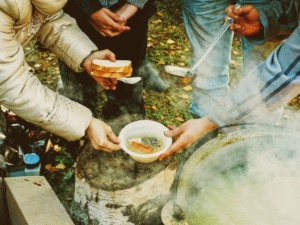 In contrast, James gives us examples of two people in God’s Word whose works, or deeds, proved their faith: Abraham and Rahab.

I read more about these two faithful people and their stories by tapping on the Cross References in the “LOOK” section.

James’ Conclusion is No Longer Confusing

Once I understand the full context of James’ discussion here, then his conclusions in the final verses make sense to me!

The question for me to consider is this: How are my works proving my faith?