Am I living a life of compromise?
Am I a follower of Jesus or the world?

O LORD, we hunger for Your Word of Truth desiring to understand it in order to live it and know the fullness of blessing and bring You honor in Your Son’s name. Thank you.

READ the next paragraph, Esther 2:5-7 asking the 5W’s and H Questions.

Mordecai is key as he is one of the main characters. His name appears 52 times in this book.

Check Out The Meaning

MORDECAI, mordekay; A….B. The cousin of Esther. His name indicates a recognition or tie to the great Babylonian god Marduk. Like Daniel, he had been given or taken on a name that reflected the nation and culture where he lived. He was from the tribe of Benjamin (Esth. 2:5–6) and had gone into exile at the hands of Nebuchadnezzar. Through divine providence, Mordecai was able to expose a plot to assassinate the Persian king Xerxes (Esth. 2:7–23). And he successfully thwarted, again through a conjunction of events by divine providence, a plan by Haman (possibly an Amalekite) to destroy all the Jews in the empire (Esth. 3—7). He encouraged Esther to use her position and power to deliver the Jews (Esth. 4:12–17). He was honored highly by the king twice (Esth. 6; 10).

Let’s STOP here for a minute. I want to share a little history to shed some light.

The goal of the Babylonians was to subtly indoctrinate the Jews in exile.

1. Change their thinking – by removing the truth of God’s Word, teaching the Babylonian language and literature, (Dan 1:4).

Thus, they would teach them man’s wisdom and the lifestyle of the nation.

Offering Babylonian foods, and the opulence of their world and material things. But Daniel and his friends made up their minds not to defile themselves.

It was a subtle indoctrination to turn the Jews from Jehovah God to their gods, causing them to gradually adopt the Babylonian religion and habits.

What is a Jew?

Tap on ‘Jew‘ in your Bible.

Do you see the definition pop open?

JEW, yehûdiy; to depict some inhabitants or persons of Judah.

TIP: I would encourage you to note this in your hardbound Bibles.

Let’s Do Some Cross Referencing 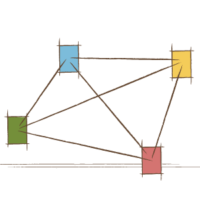 1. As we look at Mordecai, what more do you discover about a Jew?

2. What generation of deported Jews was Mordecai?  Being a Benjamite, who was he related to?

3. What happened to those who had been taken into exile?

4. Why might Mordecai not have returned to Jerusalem under Cyrus?

5. What do you learn about Jeconiah, the King of Judah, also known as (Jehoiachin/Coniah)?

#12. We are now introduced to Mordecai who was in the same city as the king.

a. What do you discover about Mordecai, CR? Why might Mordecai not have returned to Jerusalem to build the Temple, CR?

b. What is his relationship to Esther? What does this show you about his heart? (v5-7)

The name Mordecai indicates a recognition or tie to the great Babylonian god Marduk.

And right out of the gate we discover that Mordecai was related to King Saul, a Jew, the name given to the Hebrews who were from Judah.

Mordecai’s great grandfather Kish, a Benjamite, the father of King Saul, had been taken into exile in Babylon with King Jeconiah king of Judah.

Jeconiah (also known as Jehoiachin, and Coniah) was taken in the second exile in 597BC, 114 yrs before this present time of Mordecai. He would die there, childless, no heir.

We see God working behind the scenes by somehow getting Mordecai, the great grandson of Kish, to Susa 120 miles east of Babylon.

Mordecai then is probably a 2nd or 3rd generation of the exiles, so he was either given this name by his parents that was based on the name of the Babylon god Marduk, or he took it on himself to fit in.

Mordecai is in the citadel (the palace and/or capitol) of Susa. So Mordecai’s family didn’t return to Jerusalem with the others. Why wouldn’t they want to be closer to God? Why would they stay in a pagan country and the culture of Persia – it’s lifestyle, customs, values, etc.?

Questions to ask the Lord?

Were they being rebellious?

Does this mean they had compromised and become worldly?

This would make us wonder if Mordecai is a genuine follower of God?

Am I a genuine follower of God?

Do I say I am a follower of God, but outwardly live following the world?

One Last Thing to LOOK At

There is no substitute for repeated readings of the text. And even better – read it aloud.

You will find yourself subconsciously memorizing these verses.

Esther is key, as she is another main character.

Check Out the Meaning

ESTHER, estēr; Her name Persian name meaning “star.” She was raised up by God at the right time and place to bring deliverance to the Jews in Persia (Esth. 4:12–14). An Amalakite, Haman, plotted to destroy God’s chosen people, but Esther and Mordecai worked together to thwart the plan (Esth. 3—4). The Persian king Ahasuerus (Xerxes) reigned 486–465 B.C. Her request to slay the enemies of the Jews is not to be followed today, but God’s great deliverance of the Jews is still celebrated in the Feast of Purim today (Esth. 10:18–32).

1. What else can you learn about Esther and her circumstances?

2. What does God say about being beautiful of form and face?

Pull It All Together

13. What do you learn about Esther (Hadassah)? Check out her names. Do you see God’s unseen hand working? (v7)

Take you beyond just reading and passing right by it.

We see Mordecai did a good thing, he adopted his uncle’s daughter.

We are introduced to this orphan girl Esther, who has 2 names, one being Hebrew that her parents must have given to her. But also a Persian name, that perhaps Mordecai gave her. So which one is she?

Which brings us to ask, is she a true follower of God?

Does she say she believes in God, but walks according to the ways of this Persian Empire?

We see God is the one who knew Esther before He ever placed her in her mother’s womb, creating her beautiful in form (figure) and face, for His glory and will.

Am I an orphan?

Have I been adopted?

Have I experienced the loss of my parents?

Am I living with 2 names, 2 different identities?

Do I say I believe, but I am living a compromised life in this world?

What in my life indicates that I have a relationship with God?

What difference does it make in my life to know that the God of all knowledge fearfully and wonderfully made me just the way He wanted me, for His glory and His will?

What must I do to live for His glory and will?

– Am I different, following Jesus wholeheartedly, living wisely in this corrupt world?

– Or, am I blending in and becoming like this unbelieving world that refuses to acknowledge God as King?

b. Who has God put in front of me that I need to reach out and help?

a. How do I handle life-shattering experiences, such as the loss of my dad and mom?

b. Am I living with 2 names (2 conflicting identities) in 2 worlds (trying to follow Jesus and the world)? Why?

“There are TWO METHODS OF SACRED CONVERSE BETWEEN GOD AND THE SOUL: sometimes the Lord calls to us and we reply, and at other times we speak to God and he graciously deigns to answer us. A missionary some years ago, returning from Southern Africa, gave a description of the work which had been accomplished there, through the preaching of the gospel, and among other things he pictured a little incident of which he had been an eye-witness. He said that one morning he saw a converted African chieftain sitting under a palm tree with his Bible open before him. Every now and then he cast his eyes on his book and read a passage, and then he paused and looked up a little while, and his lips were seen to be in motion. Thus he continued alternately to look down on the Scriptures and to turn his eyes upward towards heaven. The missionary passed by without disturbing the good man, but a little while after he mentioned to him what he had seen, and asked him why it was that sometimes he read, and sometimes he looked up? The African replied,— “I look down to the book, and God speaks to me, and then I look up in prayer, and speak to the Lord, and in this way we keep up a holy talk with each other.” I would set, this picture before you, as being the mirror and pattern of intercourse with heaven,— the heart hearkening to the voice of God, and then replying in prayer and praise.” Spurgeon

I pray you are learning this sweet communion with your Father, God.

Save Your Discovery in Your Notes

OUR FATHER IN HEAVEN, we seek to bless You with our praise today! We are so thankful for Your Word that frees us, that cleanses and sanctifies us. May this Word that we just read slowly and with purpose make headway from our heads to our hearts. May we truly ponder and chew on what You are saying to us about living with two identities like Mordecai and Esther. Do we say we belong to Jesus, but we really don’t. Help us to examine ourselves to see if this is true of us. Help us to understand we cannot live in 2 different worlds.

May we understand You knew us before You ever placed us in our mother’s wombs. Creating each one of us just the way You wanted us, special and unique for Your Kingdom purposes. Oh may we comprehend that in creating us, You created us to live for You, doing Your will and bringing You glory! Oh may Your holy Word renew our minds and transform us from the inside out! We ask this in Jesus’ name. Amen!

Next: we will dig in to understand another small bite, Esther 2:8-11.